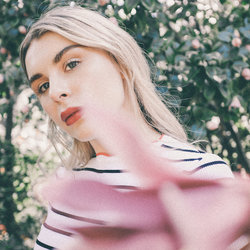 Owl Eyes captured the hearts and minds of both fans and media with her hugely successful debut LP Nightswim (2013) which cultivated the young artist a legion of dedicated and loyal fans, not to mention widespread acclaim. Featuring the title track and fan favourite ‘Nightswim’ and lead single ‘Closure’ (over 3 million streams), Nightswim saw the Melbourne artist undertake a sold-out national headline tour and extensive metro and regional tours, perform on national TV on RocKwiz, head to the US for SXSW Festival and grace the cover of magazines throughout the country. Owl Eyes has also featured on tracks with the likes of Illy on ‘It Can Wait’ and on Flight Facilities’ smash hit ‘Heart Attack’.

Over the last few years, Owl Eyes has been touring the world as a vocalist with Flight Facilities, the opportunity allowing her to perform to huge crowds across the globe, including coveted slots at Coachella and Glastonbury. She features as the main vocalist on the dance duo’s live recording of their set at Melbourne’s Sidney Myer Music Bowl with the Melbourne Symphony Orchestra.


Owl Eyes dreamy new single 'On Me' is her first solo music for some time and marks her highly-anticipated return. It is a poignant ode to finding power within oneself in the face of uncertainty.