Okin Osan - I Wanna Be That Girl - Internet Download 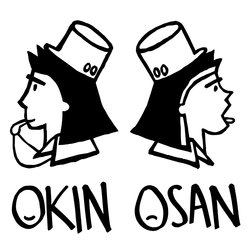 Okin Osan is Sydney-sider Rose Chan. Her songs, written between the ages of 13 and 18, are about teenage exploits and dreams. Now in her 20‘s, the music becomes increasingly retrospective and nostalgic. Her sound is brought to you by 50's rock 'n' roll and 80's American punk. The live set up includes Rose on vocals and guitar, Fenn Idle on drums, and Rainbow Chan on synth. Since 2013, Okin Osan has been playing across Australia with artists including Fazerdaze, Hachiku, Jeremy Neale, and Major Leagues. Okin Osan is known for breaking the ice with off-beat banter and getting people, even corporate squares, twisting to sunny guitar rock. Her debut EP, “Are You Game?” was released November 2016 through Healthy Tapes.

The latest single "I Wanna Be That Girl" released 11 April 2018 and songs from “Are You Game?” have been played extensively on radio stations nation-wide including: FBi Radio, RTRFM 92.1, 2ser FM, Radio Adelaide, SYN, Local Noise, 4ZZZ , 3MDR 97.1 FM, triple j Unearthed. The EP's lead single “You Tell, I’ll Listen” was included in The Bridge on FBi’s Class Of 2016 compilation. The EP was also praised by The Le Sigh, Ripe, and 4ZZZ's Chris Cobcroft.


"I Wanna Be That Girl", the latest single by Sydney's Okin Osan, was written by Rose Chan in 2010 at age 16, and has just been added to rotation on FBi Radio. This punchy garage-pop gem is minimal but hard-hitting, capturing Okin Osan’s energetic live show and evoking highschool crushes.