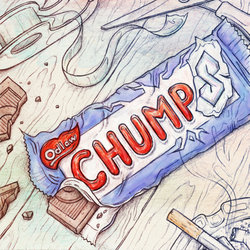 Chumps was written after the 2015 WAM Festival and conference, so it only seems fitting that they would launch it during this years WAM Festival. Songwriter Mark Neal keeps himself busy, between acting as manager for other bands, booking gigs, working on various events, and running a radio show on RTRFM. These opportunities have earnt him an interesting perspective into the background discussions surrounding an event like WAM Festival.

Chumps was written about a discussion respected members of the music community were having about a particular individual who falls into a category referred to as ‘punishers’. A ‘punisher’ is someone who is annoying as f**k, and often the artist he represents is terrible or irrelevant. In particular this ‘punisher’ was so annoying he causes major labels and industry leaders to vacate a venue, which in turn could mean a hard working band/artist misses out on a well deserved opportunity because there's no important industry people watching them play.

Chumps is about a certain ‘punisher’ that was discussed in great details at WAM Festival last year.


Chumps was written after the 2015 WAM Festival and conference and we are launching at the 2016 conference. It's about a person in the music industry who is really annoying.