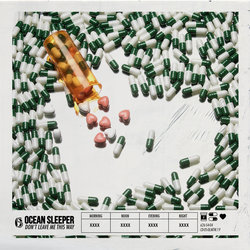 Metalcore upstarts Ocean Sleeper are no strangers to redefining convention. From humble beginnings in regional Victoria, to sold out shows across the country, sharing stages with the best in the heavy music and chart smashing singles. This unassuming outfit from Australia’s regional south east has seen a meteoric rise since the four friends decided they wanted to play in a band together one winter in 2016.

Six months on from their first shows in their hometowns, Unify 2017’s callout for a local band met an overwhelming response from the small army of fans Ocean Sleeper had gathered. Despite only having one song out at the time, the band quickly pulled together their debut EP Six Feet Down and dropped their debut moments before walking on their first festival stage. Needless to say it peaked at #1 on the Itunes Metal Chart and #11 overall, it then took 3 weeks to come down from it’s #1 position on the metal charts.


From vocalist Karl Spiessl’s signature screams to the repetition of clean vocalist and guitarist Ionei Heckenberg’s soaring chorus- “it seems like everything is burning around me”- ‘Killing Me’ is a track loaded with intensity and genuine emotion.