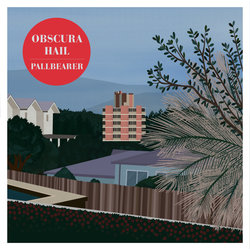 Conceived on NSW’s South Coast in 2006, and now buried alive in Melbourne’s North, Obscura Hail is a testament to the indie dream; writing, recording and releasing self-contained albums from an ad-hoc bedroom studio.

Sparked by an irrational fear of memory loss via mercury poisoning from an amalgam tooth filling, Obscura Hail embodies a routine of unpacking personal, nostalgic, and ontological thoughts with urgency. A commitment to the craft has cultivated an extensive backlog of experimental demos, binaural field samples, and official releases, all leaping erratically between definitions for the sake of sincerity of reflection.

His live performances are cross sections of this decade long process, baring the motifs of galloping finger work and a politely quiet vocal delivery. The ensemble has evolved from a solo expression, through a barbershop quarter, now resting as a three-piece outfit with a fittingly obscure Nintendo DS drum machine, so to translate the recent high energy the project has outputted (‘ALARM’ EP, ‘Pizza’ EP), present a grander reinterpretation of his previous works, and prepare for 'PALLBEARER' (15.11.18)


Recorded between 3 and 4am in a humble bedroom studio above a quiet forest courtyard, Laces is an ode to dissociation brought on by a death in the family; feeling like a stranger in your own home