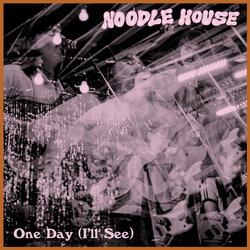 Jangly guitars and well-layered instrumentals set the foundations for a classic Noodle House song, while Jack Kinder's smooth vocals float above, tugging at your heart strings and hypnotising you. The band's song writing has been likened to the sounds of LA's Drugdealer and Weyes Blood, channeling a certain authenticity that reminds you of George Harrison and John Lennon.

Noodle House are currently making waves across Sydney, with their live performances becoming an instant favourite. Their debut single 'Till The End' quickly became a cult classic, paving the way for their newest song 'One Day (I'll See)' which is featured on a Split 7 inch record released on Third Eye Stimuli Records in August 2019. Noodle House are also busy writing and recording new songs for an upcoming EP.


'One Day (I'll See)' is a sweet love song that frontman Jack Kinder best describes as being about "a fictional, dysfunctional relationship. And a one-sided break up, and not realising at the time but knowing in the end, ultimately, it’s for the best.” The song is layered with lush guitar and keyboard tones, and Jack's smooth echoing vocal melodies.