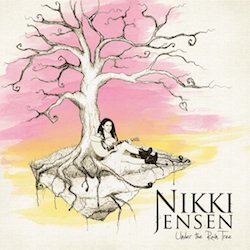 Nikki Jensen only started writing songs and playing guitar under two years ago but in that short time the Far North Queensland Singer/Songwriter has even charmed His Royal Highness Prince William as an audience member.

In January 2011, Nikki’s unique mix of Folk/Pop/Country launched her into Grand final of the national Telstra Road to Tamworth competition.
Her performance at Tamworth caught the eye and created a fan out of Australian Pop/Country queen Kasey Chambers who invited Nikki to play on stage with her during the festival and subsequently invited her to record her debut EP with her and husband Shane Nicholson in June 2011.

Since recording the songstress has played alongside Triple J’s Emma-Louise, Adam Harvey, Shane Nicholson and Kasey and Bill Chambers and played her own set and joined the Chambers clan on the main stage at the 2011 Gympie Music Muster

Nikki’s debut EP ‘Under the Rain Tree’ was released to rave reviews, and her music video for the single ‘Hypotheticals’ can been now seen on Landed Music, Country Music TV and CMC.

Nikki has just wrapped up a 3 months tour of the US.


Acoustic guitars, soaring vocals, xylaphones, unforgivably catchy hook makes it hard not bounce and sing along to this track.
"Hypotheticals" could very well be the crossover single that brings Jensen’s folk/pop/country to the masses.

Other tracks by Nikki Jensen: Lay Down Misère