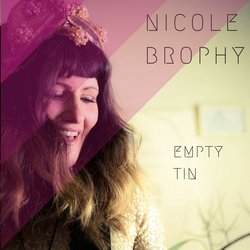 Nicole Brophy has a voice and style compared to the likes of PJ Harvey, Lucinda Williams & La Roux. ​Stylistically it fits somewhere between gritty rock, alt-country hoedowns and moody, bluesy numbers, all brought together by a raw charismatic earthy voice and boundless energy. She has an undeniable presence on stage, upbeat, always moving, engaging the crowd, playing acoustic or electric guitar and just driving her passion into her songs.
In previous band Dirty Lucy, their highly acclaimed debut album Dark Green was released in 2003 and the follow up mini album Music, People Cities, Lights & Darkness was released in 2006 while touring relentlessly to every corner of the country for over 4 years solid.
Dirty Lucy went on hiatus in mid 2007, and rising from the ashes of day jobs and vocal nodule operations Nicole joined the touring band of Multi-ARIA nominated performer Kate Miller-Heidke in February 2008 and hit the road again playing to thousands of people at festivals and theatres both here and overseas.
Nicole is currently completing the finishing touches on her latest album recorded in a farmhouse in the Southern Highlands of NSW co-produced by Syd Green and will be released in late 2015.


Empty Tin is a catchy hypnotic tune filled with vintage driving guitars, 60s style cheeky layered harmonies and drum fills galore. This track will drive its way into your mind with its straight up brutally honest lyrics written out of the pure frustration of craving more from love and life..