Nicki Gillis - Always On My Mind 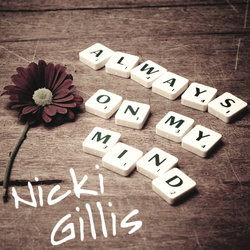 Born in Western Australia, Nicki has been singing and performing since she was a child. Her career has included numerous highlights and accumulation of many awards and chart success both here in Australia and overseas.
In 2009 Nicki won the Frank Ifield International Spur Award, and then her international touring schedule expanded from the UK to the USA and New Zealand.
In 2011, Nicki embarked on her 3rd extensive tour of the United Kingdom, headlining her own sell-out club and festival shows, and in May she was named as “Best Country Music Performer or Band in Australia” at the prestigious Mo Awards.


This is a classic song dedicated to all those people who for various reasons are separated from their loved ones. Nicki is passionate about families being separated on significant occasions such as Christmas, Birthdays and Anniversaries. A passion that was reinforced during her tours overseas performing for the troops in the Middle East, Solomon Islands and East Timor.

Other tracks by Nicki Gillis: Remember The Wounded  -  I'll Go My Own Way
%