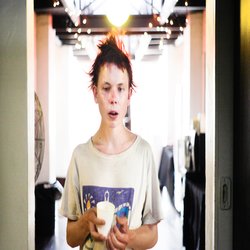 Ever since the days of sunshine and lazy teenage silliness, Nicholas Allbrook, like the rest of his Perth comrades, has been ferreting away in bedrooms, buses, airplanes, studios and hotels making sounds and making songs.

Nicholas Allbrook has made his mark as a core figure in the Australian psychedelia revival. Despite being only 26 years old, he boasts an incredibly impressive, expansive musical resume: not only was he a founding member of internationally renowned Tame Impala, he's a founding member of Allbrook/Avery (with core Tame Impala/Growl/Pond member Cam Avery) and Mink Mussel Creek and "fronthuman" of POND, to name a few. Now, Allbrook is set to finally release his much-anticipated debut solo release, "Ganough, Wallis and Fatuna" on September 5. It will be released digitally as well as on vinyl, which drops September 12.


100k's Round Carmel begins in a trippy psychedelic tone, before layers of guitar, beats and a seriously funky, almost-gospel female chorus build on the track, packing some real punch and creating something truly special. As complex as it is fuzzed-out, this is a landmark single for the newly solo artist.