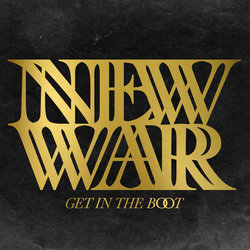 You won’t hear many modern groups that match NEW WAR’s Kitchen Sink rage, Vorticist sneer & Delphian vision. Imagine an American gasping for life with three Australians pushing their instruments within an inch of theirs. All stood on the edge of a crag, finishing each other’s jokes as they start to slip.

Picture a fever blur of Rhythm & Detonation (R&D), open-bordered punk, fevered and lurching dub, pop as sharp as Northern 80/90s & as loose as Hansa-era Iggy. They’ve been described by The Music as like ‘the Birthday Party in the 25th century’ & by Tiny Mix Tapes as ‘Lynchian mysticism… burning in This Heat’s tape machine’ but as Crawlspace wrote ‘comparisons only tell a partial story...the blood in this group is their own & it pumps ferociously.

Acknowledged by many as one of Australia’s best & most thrilling live bands, NEW WAR builds on their lauded debut by spilling out in new directions while keeping the essence of the group intact. Their new album is Coin, it’s out August 2018 on respected Melbourne underground label It Records & it needs to be heard.


Relentless, catchy & at moments completely unhinged, ‘Get in the Boot’ flits between Elizabethan throne rooms, Garbo, & magical realist nursery rhyme, foregrounded by a goose-stepping rhythm section & synths like an air raid being eaten by a swarm of bees.