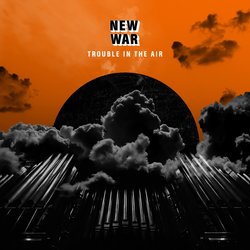 New War began making music together over a decade ago, shunning traditional release and touring schedules in favour of working at their own pace, on their own path. Their debut self-titled LP was released in 2013 through All Tomorrow’s Parties to critical acclaim. The band's follow up and most recent release was their sophomore record Coin, released last year through It Records.

Since forming in 2008, New War have toured Australia and the UK, played festivals including All Tomorrow's Parties and MONA FOMA, shared stages with the Sun Ra Arkestra, My Bloody Valentine, Wire, EMA, Liars, Neu! / Harmonia and Laughing Clowns, and been remixed by HTRK and Gossip.

Trouble In The Air marks New War's first ever release of a curated live recording, and is a record that the band describe as a "cold dream of uncertainty & rupture". It may certainly be the world's first ever post-punk record written on and for a Grand Organ.


After being commissioned by the City of Melbourne to create a new song cycle composed for voice, bass guitar, electronics and the Melbourne Town Hall Grand Organ, New War return with Trouble In The Air, a post-punk LP written for and recorded live on the largest organ in the Southern Hemisphere. Bang On is the first single.