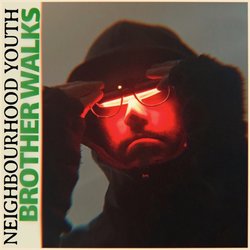 It’s rare to be able to physically hear a band’s sheer determination through their music, but Melbourne quartet, Neighbourhood Youth, display just that – with a captivating style of songwriting that defines hard work. Comprised of John Philip, Sam Nathan, Liam Jenkins & Ryan Mano, Neighbourhood Youth have taken enormous strides since their formation in 2013, touring with the likes of Turnover (USA), Waax & Ceres, as well as joining the massive Up The Guts tour from Melbourne to Darwin alongside Loose Tooth & Dumb Punts.

Having already found radio success with ‘Lately’ & ‘Aim For The Head’, the band’s debut record, which is due early October, is set to deliver the cascading guitar lines and driving rhythm that they have become so well known for.

A crowd favourite and a staple of the band's live set, 'Brother Walks' is powerful in its execution, with the ship steadily controlled by the band's intuitive nature.