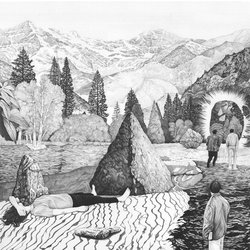 A singer-songwriter whose literate, evocative songs are paired with music both adventurous and eclectic. Collette grew up learning the power of both music and words. In 2002 he completed an honours degree in improvised music and composition and founded City City City, a seven­-piece band whose work spanned minimalism, improvisation and pop. He also helped found and run Melbourne’s Make It Up Club – one of the longest running weekly forums for experimental music in the world.

Ned’s first solo album 'Jokes and Trials’ came out in 2006, to enthusiastic reviews and comparisons to Leonard Cohen and Robert Wyatt. After tours with Joanna Newsom and Bill Callahan he returned with ‘Future Suture’, which was less confessional and more focused on storytelling. Collette began giving his backing musicians equal billing with 2009's ‘Over the Stones, Under the Stars’, with bassist Ben Bourke and drummer Joe Talia credited as Wirewalker. The album was a departure towards more sparse, rock-­based arrangements. 2012 /2014 saw the release ‘2’ and ‘Networking In Purgatory’ and the development of deeper experimental work within their sound.

‘Old Chestnut’ is his sixth album, featuring his Wirewalker bandmates as well as contributions from Anthea Caddy and The Necks’ Chris Abrahams.

“his most lucid, literate compositions yet" Clash Magazine

"Old Chestnut is packed with nuggets of interesting storytelling like Thanks Richard and Sacred Cats." The Music

Other tracks by Ned Collette: Thanks Richard  -  Sacred Cats
%