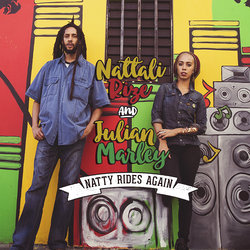 Ask her where she comes from, she’ll tell you “All Directions”. In line with her philosophy she claims not to belong to any nation state but to the ever evolving community of conscious thinkers and creators anywhere & everywhere. Of mixed global heritage, with dominant Native American and Samoan roots, Nattali Rize has been known around the world for her work fronting epic roots band Blue King Brown as well as for her unwavering commitment to using her voice and music for the global struggle toward the realization of Full Freedom and the movement of Truth and Justice over the systemic exploitation of the people and our planet.

“Nattali is a bright light in the world with a vision that extends beyond the stage.”– Michael Franti (Spearhead)

The ever evolving and dynamic front woman now leads out fresh as a solo artist, with a heavy Reggae influenced Jamaican / International band, she describes her universal sound as World Beat. Lyrical. New Era. Nattali is Known for her high energy, thought provoking and uplifting live performances, whether it be fronting her electric band, performing solo, unplugged, or accapella.


Nattali Rize (of Blue King Brown) collaborates with Julian Marley, son of the late great Bob Marley, on new deep reggae track. Their rare video clip was filmed at Bob Marley’s house and surrounding areas in Kingston Jamaica. This is a first-of-its-kind release for any Australian singer.