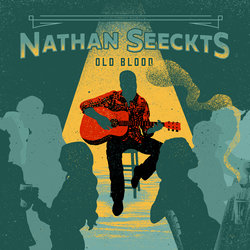 Taking inspiration from the songbooks of artists including Bruce Springsteen, Jason Isbell, Lucero and Steve Earle, Nathan's songs could find him comfortably at home in any bar from Melbourne to Memphis.

He has been honing his sound through bars and stages across Australia and North America since 2010, making appearances at Queenscliff Music Festival, Tamworth Country Music Festival and Melbourne’s Poison City Weekender, Seeckts has also supported many fine Australian artists including The Teskey Brothers, Archie Roach, You Am I, Tex Perkins, Cash Savage and Raised By Eagles, and international luminaries including Joe Pug, Big Country, Courtney Marie Andrews and Deer Tick.

His debut full length album The Heart Of The City features all the qualities that make Nathan Seeckts a standout artist in the Australian Americana scene; his ability to craft engaging stories of love and loss, his combination of alt-country and folk, and his commanding and indelible voice - equal parts gravel and passion.


There’s a fine line between pride and arrogance. Sometimes it’s hard to tell them apart until it’s too late. This track is the lament of a small town musician who let glimmers of notoriety go to his head over time, only to find himself years later without his youth or the so-called friends he thought he’d made along the way.