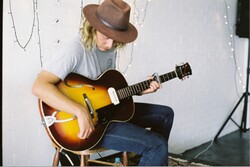 Handed a guitar from his father in the early part of 2006, Nathan Hawes began to find a love for music, playing guitar on and off for the following 5 years. In 2012 he decided to add vocals to his guitar work and found a passion for song writing. In December 2014 he released his 4 track debut EP "Left with the Wolves" which went #1 on the iTunes album chart and also #1 on the iTunes singer/ songwriter charts.

Now, ‘Left with the Wolves’ is the first single taken from Hawes' forthcoming EP ‘I Wasn’t There’, which will be released via Island/Universal Music February 12. His signature acoustic-folk sound has also already grabbed him a strong fan-base with over 60K Facebook Fans and 125K Instagram followers.
He has also amassed hundreds of thousands of hits online for his covers and original songs, including his rendition of Drake’s Hold On We’re Going Home, viewed over 173,000 times.

Nathan is currently out on a national tour, showcasing songs from the forthcoming EP to his fans.


“I started writing ‘I’ll Remember’ when I was living in Sydney and spending a lot of time away from my family. I wrote it as a reminder to myself to remember who you are and the people who have given up a lot of their time for me.” - Hawes.

Other tracks by Nathan Hawes: Left With The Wolves
%