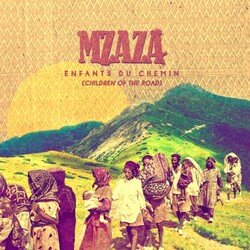 Exploring themes of migrations and the spirits of ancestors left behind, Ghosts is inspired by the stories of Mzaza’s families, and of people around the world who have migrated or whose ancestors once migrated, voluntarily or not. The longing, plaintive opening refrains of album lead track, and single, ‘Enfants du Chemin (Children of the Road)’, soon give way to frenetic movement, swept along by the passionate, comforting tones of lead vocalist Pauline Maudy’s French language story: “always from somewhere else, further away / we are built from nothing / children of the road.”

The impressive musicianship of Mzaza embraces diversity, the old and the new, the familiar and the foreign, through timeless melodies. It is the timelessness of the music and story that fuels an intense live show, an unforgettable musical journey, that has enraptured audiences at MONA FOMA, Queensland Music Festival, Cygnet, National and Woodford Folk Festivals, and visited airwaves internationally. Jaw-dropping technique, unique compositions and captivating shows have earned Mzaza supports for the likes of Yasmin Levy (Israel) and DJ Click (France), and will soon be seen in a series of inimitable headline performances in unique venues along the Australian east coast.


‘Enfants du Chemin (Children of the Road)’ could not be a more apt introduction to the third release from Brisbane world music darlings Mzaza [pron.EM-ZA-ZA], an LP entitled Ghosts.