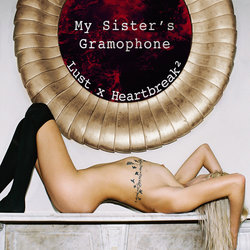 “Not another story about Kim Kardashian!” you might be thinking, as you walk past a newsagent and notice the American celebrity, infamous for being a celebrity, splashed across the covers of half a dozen magazines. Or remember Paris Hilton? With the rise and rise of social media, the world seems to be “creating” ever more “celebrities” whose every move, every love affair, every scandal “demands” our attention. But why should we care?

That’s what eventually crossed the mind of singer, songwriter Brad Patison. After his initial dismissal of the whole phenomenon, he began to wonder what it must be like to be someone unfortunate enough to fall in love with someone who ends up in the eye of the storm that is contemporary celebrity, and his conclusions, as he thought through their possible stories, began to crystalize into songs.

In My Sister’s Gramophone's debut album, Lust X Heartbreak², he has certainly achieved that, each track complete in and of itself. The nine songs that make up this remarkable first album take you on a journey through the many facets of falling in and out of love and then coming to terms with things and moving on.


The mechanisms behind why we have to battle with loss, period; is unclear.

The resounding question that remains for past and present when contact becomes obsolete or impossible. - “I Just Want To Know if You’re Doing Well”? The question with no elucidation is just that. Ominous.


Other tracks by My Sister's Gramophone: Are You Alright
%