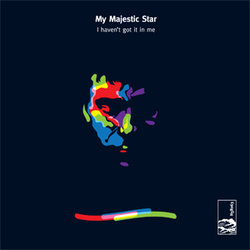 My Majestic Star began as a solo recording project for Perth artist Chris Mason (Chris Mason Implosion, Glassacre). With a background in, and love for, shoegaze and post-rock, the result was a melding of fuzzed-out ambience and shimmering, haunting melodies, which culminated in the release of the first My Majestic Star album Ideas Are The Answer. The follow-up EP Fining continued this ethic but also introduced pop elements into the mix.

With the release of second album Too Late, The Day, My Majestic Star evolved into a live act. The addition of Miriam Braun (Tragic Delicate), Stuart Medley (Benji, Fur Versions, Motor Eye) and Jamie Hamilton (PB, M-16’s) saw My Majestic Star play live for the first time, presenting a more raw and urgent side than the recorded material. I Haven’t Got It In Me has blossomed from this experience of playing as a band.


An exultant and addictive pop gem. Featuring cyclical guitar melodies wrapped inside staccato cello and luscious multi-tracked vocals, it becomes near impossible not to be sucked down the center of the track's honey soaked whirlpool.

Other tracks by My Majestic Star: Crampling  -  Like Cracked Glass
%