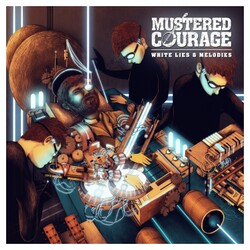 Like the Avett Brothers and Old Crow Medicine Show before them, Mustered Courage are bridging the gap between traditional bluegrass and modern roots music. Dubbed by Music Australia Guide as “the link between Bill Monroe and Mumford & Sons”, the band is back with a brand new, energetic and irresistibly catchy single “Honesty”.

Mustered Courage has risen to the top of Australia’s folk and roots scene on the strength of their energetic live shows and albums that have won them glowing reviews, loads of radio support and a trophy at the 2015 CMAA Golden Guitar Awards for Instrumental of the Year – “Candle Creek.”

After a heavy touring schedule of headlining club dates and festival appearances in Australia, these down-home pickers set their sights on the United States where they were invited by the International Bluegrass Music Association (IBMA) to perform at the IBMA’s weeklong 2014 World of Bluegrass conference and festival. This invitation turned into a full-blown tour that included 60 shows in 70 days across 43 U.S. states.

Mustered Courage is a band on the rise that, as Rhythms contends, is “guaranteed to soon be on to bigger things.”


Mustered Courage are back with the third single from their third and critically acclaimed album White Lies & Melodies, “Same Old Thing Again”. Replete with crisp banjo rolls, liberal solo breaks for mandolin, fiddle, dobro and guitar, and polished four part harmonies…MC carry it all off with hooky appeal.