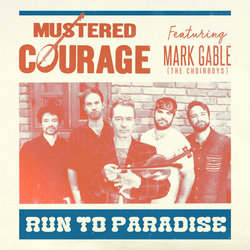 Mustered Courage breathe new life into the Australian roots music scene with a diverse sound that appeals to both traditionalists and newcomers alike. The Melbourne based quartet that Music Australia Guide describes as “link between Bill Monroe and Mumford & Sons” has risen to the top of Australia’s folk and roots scene on the strength of their energetic live shows and albums that have won them glowing reviews, loads of radio support and a trophy at the 2015 CMAA Golden Guitar Awards for Instrumental of the Year – “Candle Creek.”
After a heavy touring schedule of headlining club dates and festival appearances in Australia, these down-home pickers set their sights on the United States. Invited by the International Bluegrass Music Association to perform at the weeklong 2014 World of Bluegrass conference and festival, this invitation turned into a full-blown tour that included 60 shows in 70 days across 43 U.S. states.
Mustered Courage’s quick ascent and insatiable work ethic caught the attention of Lost Highway Records (Universal Music Australia) who recently signed the band to a worldwide record deal.
Like the Avett Brothers and Old Crow Medicine Show, Mustered Courage bridge the gap between traditional bluegrass and modern roots music.


Featuring Choirboys front-man Mark Gable, Mustered Courage have immortalized an iconic classic Aussie rock song in Australian based Bluegrass music. The result gave the song a new lease on life engaging an entire music community that may not be so familiar with the song made famous in 1988 by Choirboys.