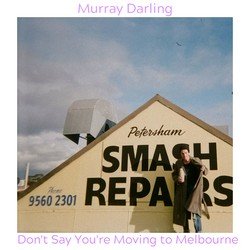 Formed in 2017, Murray Darling is singer/songwriter and self-confessed underachiever BJ Smith who has just released his new single Don’t Say You’re Moving to Melbourne, taken from the debut EP ‘Blend 43’ which is set to be released on the 16th of August.

Murray Darling has spent the last year smashing out local shows with some of Sydney’s best up and coming bands and turning heads with his unique brand of garage punk rock.

Don’t Say You’re Moving to Melbourne is the second single from Murray Darling which follows on from his debut single Leave Me This Way which was featured as on the top five tracks on the inaugural Triple J Unearthed Podcast. If you dig bands like: Bad Dreems, Scott and Charlene's Wedding and West Thebarton you’ll get a kick out of this.

Sonically Murray Darling blends elements of garage and punk and draws his musical influence from classic Australian artists and culture. Obsessed with Australia’s rivers, basins and this country’s beautiful landscape his songs are raw, honest and unapologetic.
Don’t Say You’re Moving to Melbourne is available on Soundcloud, iTunes, Spotify and all other leading digital streaming services.


Don’t Say You’re Moving to Melbourne’ is another example of BJ’s simple, honest and raw story telling which leans heavily on influences of every day living in Australia. The proudly inner west garage punk uses wit and familiarity to draw a line in the sand in the age-old Sydney vs. Melbourne battle.