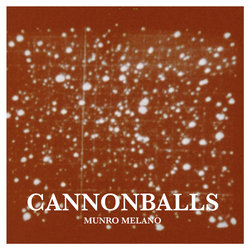 Munro wrote Cannonballs when he was living with his girlfriend after just moving house. On finishing the album, he was welcoming the birth of his first child.

At the end of last year “I’d be working at 4:30am on the album with the baby sleeping on my chest. Becoming a father is like growing new skin, everything feels different, including all this music that I’d spent years writing and recording.” Munro Melano

Cannonballs was originally tracked with Munro’s live band, and then layered with additional synthesizers, samples, and a four-piece horn section. Aside from this in 2018 Munro composed the music for internationally acclaimed documentary [CENSORED]. The debut album is released November this year.


Cannonballs floats though space. It was originally tracked with Munro’s live band, and then layered with additional synthesizers, samples, and a four-piece horn section