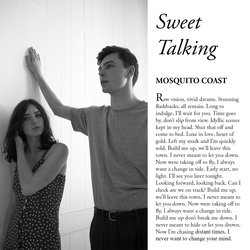 Perth dream-popsters Mosquito Coast were just 17-years-old when they caught the attention of fans and tastemakers after winning triple j’s Unearthed High 2015 and placing #101 in 2016’s Hottest 100 with their debut single ‘Call My Name’.

Following their big win the duo released two more singles - ‘Commotion’ and ‘Let’s Be Friends’, which were both added to triple j rotation. After the success of their break-out EP ‘Television Love’ they were nominated for ‘Most Popular Act’ in the WAM Awards 2016 and were also included in the ‘100 best discoveries of the last decade’ by triple j Unearthed.

In August 2018 they released the single ‘Skipping Girl’ from their forthcoming new album and gave fans another taste of their LP via a Pilerats Live Session, performing a “charming new cut” titled ‘This Type of Love’ in a beach house in Mandurah, WA.

The second single 'Sweet Talking' is set for release on 18 January with the new album scheduled for release in the first quarter of 2019.


A garage pop song with new wave influences about the exciting fast-paced whirlwind at the beginning of a relationship. Raw and upbeat, it's reminiscent of Mosquito Coast’s younger basement jams but paired with new synths and vocal harmonies and a vocal style channelling David Byrne in ‘Once in a Lifetime’ and Kim Gordon in ‘The Sprawl’.