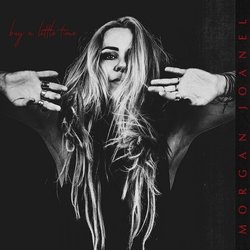 If Jim Morrison and Stevie Nicks ever had a love child, enter stage left, multi-instrumentalist singer/songwriter & visual artist, Morgan Joanel, who returns to the music scene with her new single ‘Buy A Little Time’.

Mixing up a soulful cocktail of melodies and colours, Morgan weaves clever live looping skills and evocative imagery into a captivating performance that unfolds not only live on stage, but long after you leave the show.

Layering husky harmonies over loops of surreal guitar riffs and haunting pianos, Morgan’s bohemian style bends around pulsing beats with the soul of blues. Her intriguing approach to making music live on stage has seen an eclectic mix of US and UK superstars handpick her to warm up their crowds when touring around Australia.

Most recently in April 2019, Morgan was playing an intimate gig in Perth when UK sensation Anne-Marie found her live-looping sound irresistible and personally invited her to open her headline show the following night. No stranger to playing big venues alongside international superstars, Morgan Joanel's eclectic mix of genre bending sounds and captivating live performances have earned her national tour support slots with international superstars such as Newton Faulkner, Adam Lambert, and Jason Derulo.