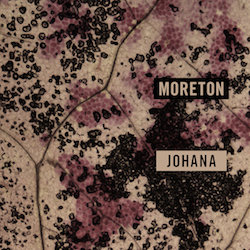 Moreton features front woman and guitarist Georgia, along with the rhythm section of drummer Myka and bassist Lee. The Specimen EP's striking recording was largely performed live with only vocal overdubs – the band working with renowned Brisbane producer Matt Redlich (Holy Holy, Emma Louise) to emphasize their mysterious and haunting tone that is dynamic, complex and subtle, while simultaneously being stunningly minimalist and bare.

‘Johana’ follows in the footsteps of their equally brilliant debut single, ‘The Water,’ which premiered on triple j and was added to rotation on double j, while its accompanying video landed with a premiere on Faster Louder, all three celebrating Moreton’s distinct sound in the Australian musical landscape.

The band’s debut EP Specimen will be released October 7 via Create/Control, while they are set to capitalize on the buzz they generated with recent performances at Big Sound when they showcase the EP with their first ever east coast tour, playing shows in Brisbane, Sydney and Melbourne throughout November.


Opening with a burst of deep and deliberate, angular guitar notes that make way to reveal a cardiac beat that remains constant throughout the song, Moreton’s front woman Georgia Potter’s powerful voice floods the mix with equally potent words as she explores the tragic tale of ‘Johana’.


Other tracks by Moreton: Specimen
%