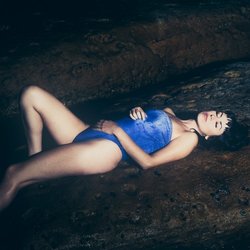 Moody Beach is the artistic project of Sydney songwriter Melissah Marie. Her art is about ‘connection’ and through music & performance she serves up some of life’s honesty and complexities.

If you’ve ever seen Moody Beach perform, you’ll see how she owns her space on stage. “A woman’s body is still a controversial subject,” Marie remarks, “it’s something I consciously tackle through my music, alongside how I behave and what I wear.” Sometimes that’s confronting for people. Marie has been told that it “distracts from [her] music…” a particularly disappointing critique in the middle of the Me Too era. “Mate, I am my music!” Marie responds “I get to decide what that looks like.” It’s a central part of who she is and through her music she hopes to make a little space for others whom feel the same.


New single “Chance” is a 5min shoegaze epic and a key moment from the EP. Sampling the hypnotic drum beat from Total Control’s “Flesh War,” “Chance” soars with a feeling of euphoric melancholy. A sweet interlude titled “Abuela” is the lead-in to “Chance” and feature’s Marie’s Spanish grandmother, a singer herself who adamantly refused to do it in English.