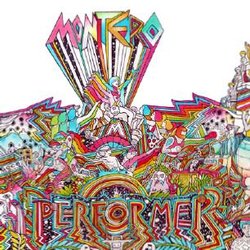 Montero is Australian musician and artist Ben Montero.
New album Performer was recorded at Mark Ronson’s Tileyard studios in
London. It is co-produced by Ben, Jay Watson of Tame Impala/Pond/Gum, and
Grammy Award winning engineer Riccardo Damian.
Montero's music evokes the extended soundscapes and textures of 70s prog, the easy
listening adult weirdness of Jimmy Webb and Burt Bacharach, and the sports
arena pounding of vintage MOR rock - sometimes all in the space of one song.

As a visual artist, Ben's much-loved comic-based style highlights the universality
of small human moments via a cast of furry (or sometimes slimy) friends. His art
has graced album covers, t-shirts and posters for Mac Demarco, Ariel Pink, Kurt
Vile, Pond and others.
In Australia, Montero has played with Ariel Pink, Kurt Vile, John Maus, Yeasayer,
Sonny & the Sunsets and The Bats.
Ben currently lives in Athens, Greece and his live band are made up of members
of Greek psych heads Acid Baby Jesus, plus other friends. The Montero band
toured UK/Europe in November 2017 supporting Mac Demarco, and heads back
to UK/Europe in February 2018.


Running Race tells the story of a master’s apprentice, isolated in a magic castle. “Running Race is about how life is a sports event, and that we're all athletes and performers. Pedaling, running, swimming, leaping and flying to achieve our own idealized beautiful victories against repressive inner forces."