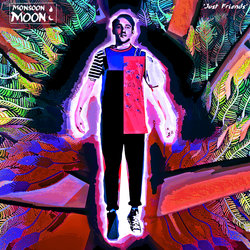 Throwing himself deeper into music and songwriting after wrapping up the Command Q project in 2017, Monsoon Moon (aka Shaun Pickett) presents a new facet of his artistry with this new project. Self-aware and open, Monsoon Moon produces music with evocative strength in its production and insatiable delivery. ‘Just Friends’ was recorded in Melbourne with the heavyweight producer Joel Quartermain before returning home in Perth to be mixed and mastered by Shaun himself at Digital Bath Studios.

The debut of the Monsoon Moon project is a stride forward into a new spotlight for Pickett. With Command Q, he stepped onto a global stage with fellow DJ Louis Frere-Harvey, copping a much-envied co-sign after being noticed by Diplo and Skrillex, eventually signing with Mad Decent and OWSLA in 2015. Earning love from triple j and tastemakers around the country, Command Q quickly became an in-demand name. The ensuing five years were spent on the road, extensively touring and levelling up production and show wise, yet as the duo were fast enjoying the peak of their career, elements of their creative drive were changing.


Self-aware and open, Monsoon Moon produces music with evocative strength in its production and insatiable delivery. The result, a wicked cut of indie-electronic in the same vein as Everything Everything and Alt-J that takes in feelings of regret, vulnerability and longing.