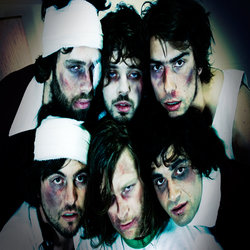 Enticing Melbourne rock fans to unfold their arms and move toward the stage is a challenge few bands meet. The average rock’n’roll outfit rarely evokes a punter’s desire to really move. Dancing one’s ass off, what’s more, is a rockeratti myth - rumours of rock-induced gyrations waft out of closed-door venues and after-parties but it’s rarely seen in the public bar.

Money For Rope rejects this history. They’ve never seen it at their shows. Their crazed rock’n’soul surf garage parties always transform a stoic and cynical crowd into an exuberant force on par with the band’s own rabid energy. The jaw-dropping energy of two drumkits, two guitars, a bass, four voices and keys command the response of an electrified room and do they get it.

They got it when they supported The Vasco Era, The Mess Hall, Those Darlins, Even, The Meanies, Celibate Rifles, Bob Log III, The Cruel Sea, Wolf & Cub and Fearless Vampire Killers. They got it when they played to thousands at Splendour In The Grass, Cherry Rock, and the legendary Reclink Community Cup.


“Misery Lane” is the next track to roll out from Money For Rope's forthcoming self -titled debut LP. The track purveys the darker, more driven side of the band, borrowing energy from the likes of Modest Mouse and Nick Cave. “Misery Lane” sounds like a song playing with matches.