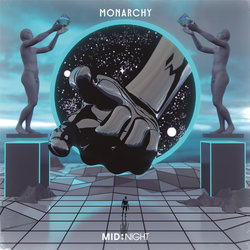 Monarchy released their third album Mid:Night on January 2019. The LP includes singles which have already amassed over 6 million streams.

Ra Black & Andrew Armstrong AKA MONARCHY have become one of pop music’s most exciting duos with their own unique brand of synth-pop. Throughout their career, the London-based band have garnered numerous accolades and achievements including releasing 2 LPs (Around the Sun in 2011 & Abnocto in 2015), racking up millions of streams worldwide, performing headline shows in Berlin, Madrid, New York, Los Angeles, London, Paris, Seoul, Moscow.

Mid:Night – has 8 distinctive vocal-led tracks which explore a variety of themes such as sex, love, lust, conflict and classism set to a playful, uplifting and undeniably catchy sound.

Deep Cut is a slickly produced synth-led funk song. MONARCHY – both originally from Australia- met in London in 2009 and immediately started to create music together, leading to their acclaimed first album which had excellent reviews from the likes of The Guardian and NME. Since then, their popularity and prestige has continued to rise. They have performed at some of the world’s leading festivals like Coachella, Eurosonic, Lovebox, Mad Cool and Reading and Leeds.


Back to the Start third single of the album Mid:Night speaks about learning to deal with conflict within a relationship. The conflict between self pride and love for another, a relationship that went too fast, and burned out.

The music production is more French touch and retro-funky.