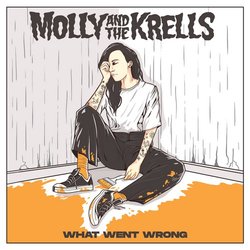 Molly & The Krells blend punk, rock and their personal stories into a scintillating sonic cocktail.

With Blake Cateris on vocals and bass, Ian Knighton & Dan Taylor on guitars and Christian Scanu on drums, the band are driven by angst, heartbreak and honesty. Caught in the endless pursuit of capturing the combination of a ‘good song’ and a ‘hit song’ and with two EP’s released through 2017 & 2018, they’re getting closer and closer to the pulse.

Losing Friends was put out into the world with five songs outlining subjects of domestic abuse, exile, betrayal and was a milestone for their songwriting prowess followed by a 5 date tour to support the release.

Two thousand and nineteen sees the rock four-piece releasing their next single What Went Wrong produced by Stevie Knight at Electric Sun Studios and a tour to support the anticipated release.

“The best thing about this band and the way they play their vein of punk rock is how they bring the old to the new in such a way that you can hear where the genre would eventually go and where it did actually go in the same song” - Matthew Spears, Musically Fresh.


My friend couldn’t seem to catch a break, she resented the help offered to her and kept making the wrong decisions. We drifted further apart to the point where we pretty much just watch each other’s Instagram stories. Some people just don’t want to be helped. I got inspired by reflecting upon our friendship and wrote What Went Wrong.