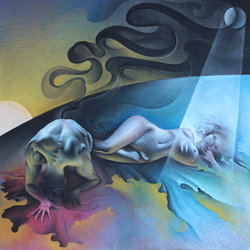 Since early 2013, the Perth music scene has witnessed the ascent of the theatrically spectacular and musically enchanting Moana. Looking right at home amongst the likes of St Vincent and The Church
on Xpress Magazine’s “Reviewers Picks for Top 10 Albums of 2014” and Tone Deaf’s “15 Incredible Unsigned Aussie Bands You Need To Hear Right Now”, the curtains are only just opening for this beguiling four-piece.

Known for a “mesmerising live presence” (The Music) and “intoxicating the crowd with a powerful and outstanding voice” (Xpress Magazine), Moana has consistently been a Perth crowd favourite; playing coveted local festivals in the past two years including the likes of RTR’s In the Pines, Rottofest, Hidden Treasures, Beaufort Street Festival and WAM Festival.

In an artistically inspired leap forward for the group, Moana is in the process of releasing an unconventional three-part EP titled The Trilogy of the Black Monsoon. A collaborative mix of both sonic and visual art, the six track release has been broken into three staggered parts throughout 2015. The third and final instalment of this ambitious project will be launched on the 31st of October, with a national tour to follow.


Vader is a genre-defying art-rock track that somehow magically mixes heavy, stoner-space-rock with the fierce spitting and darkly hip hop-esque lyrics of Moana Lutton. The carnal, seductive vocal delivery and the sparse drum and bass that build the song's atmosphere make for one beast of a track.