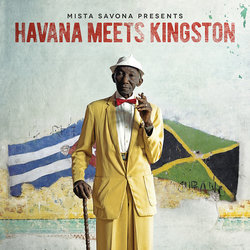 HAVANA MEETS KINGSTON – the ground breaking collaboration album fusing together the two islands of Jamaica and Cuba will be released world wide on Friday, November 3rd..

HMK brings together established and emerging Cuban and Jamaican musicians in an album of all mostly original songs, as well as covers of classic Cuban material. The main recording sessions took place over 10 days in June 2015 at the famous Egrem Studio in Havana, Cuba. Savona personally flew seven Jamaicans into Havana for these sessions, including Sly & Robbie, Boopee and Bongo Herman among other greats. In the studio they joined Buena Vista Social Club musicians Barbarito Torres and Rolando Luna, alongside Cuba’s most influential percussionist Changuito (Los Van Van) and many more.

A richly textured songbook that swings effortlessly from the cigar-and-rum-perfumed atmosphere of Old Havana to the humid abandon of Kingston’s heaving nightclub scene, Havana Meets Kingston weaves together Spanish-language ardour and entrancing Jamaican patois, spinning a musical web that transcends language – speaking to nothing so clearly as hips and heart, in equal measure.


'It's hard to believe the Buena Vista Social Club album was recorded over twenty years ago. I took some classics from that record and gave them a Jamaican twist. For 'Candela' I wanted to get funky and Sly plays an absolutely killer drum break alongside Barbarito's looping riff.