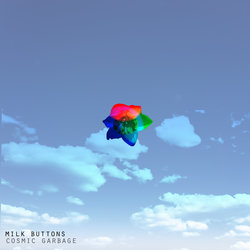 After making a highly acclaimed debut mid-2017, this Melbourne/ Brisbane pair that makes up Milk Buttons are back with their new indie rock/ alt-rock single ‘Cosmic Garbage’.

Wearing their influences such as The War On Drugs on their sleeve, the duo caught the attention of media outlets such as Rolling Stone AU, Music Feeds, theMusic and many others with their debut EP ‘Songs For My Butcher Bird'.

This EP delved into an inventive world of psychedelia and alt-rock. Milk Buttons at the time maintained a heavy focus on their array of analogue synthesisers, layered instrumentation and eclectic twists and turns in song-writing which showcased their unique ability to create wide-range of this highly creative rock.

Now with this ripened first follow-up release since their debut, 'Cosmic Garbage' highlights a new passage of life that is beaming out of this duo and sets a marker for what else is to come from Milk Buttons throughout 2018.


‘Cosmic Garbage’, as the title may suggest, has Milk Buttons staying true to their love of alt-rock, however, they have formulated something much more comprehensive.

Bursting with exulting sentiments such as “Tell me something, anything, I’m happy to be here, talking with you” and “It’s true, there’s no one like you”, ‘Cosmic Garbage’ stirs an elating mood.