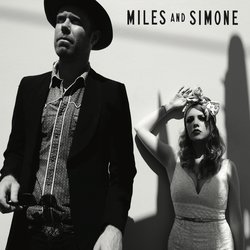 Hip alt-country folk duo Miles and Simone weave their lonesome seaside lullabies and heartbreaker ballads with restraint - two sublime voices and a guitar. Simone Page Jones, with her operatic voice and theatricality (a former Rackette from Clairy Browne and the Bangin' Rackettes, opera and cabaret star, creator of critically acclaimed cabaret The Lovebirds) and Miles O'Neil, with his brooding voice and laconic charm (founding member of award-winning “junkyard theatre” trio and band, The Suitcase Royale), shake their tail feathers on stage with their wistful stories, charming banter and poetic murder ballads. Miles and Simone's new songs sit comfortably alongside the likes of Johnny Cash and June Carter, The Handsome Family and Gram and Emmylou.

Having played Melbourne International Arts Festival, Brisbane World Theatre Festival, Darwin Festival, Adelaide Cabaret Festival, Falls Festival, The Famous Spiegeltent and supporting Clairy Browne and the Bangin’ Rackettes, Tinpan Orange and Harry James Angus, Miles and Simone have just released their second album with renowned engineer Adam Selzer (She and Him, M. Ward, Jolie Holland). Dance with Me For a While was released in March 2016.
“The incredibly full-bodied and clean sound produced by two remarkable musicians was ineffable” - Timber and Steel


1997, the first single from Dance With Me For A While was written in one sitting in the lounge room of my parents house and is, for me, built around the image of a man on his knees, crying on the lawn.

Other tracks by Miles and Simone: If I Could Turn Back Time