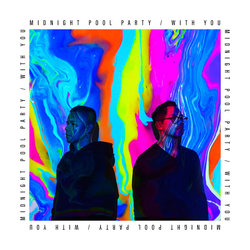 Since their beginnings Midnight Pool Party have evolved from their “classic-disco” sound & style into a mature electro/dance/house realm. As their songwriting & production began moving in this direction, Morilla also started experimented with his vocal styles and lyrics, and along the way discovered what he felt was a more natural-feeling sound as he drew his influence from the likes of Drake, Pharrel Williams and Anderson Paak.

In 2017 they released their debut ep ‘Dalliance’ which received praise and attention from old & new fans all over the world. With key singles ‘Waiting’, ‘Vulnerable’ and ‘Collide’ collecting over 2 million combined streams on Spotify alone, Morilla & Oliver were left feeling utterly proud of everything they had accomplished, so they jumped straight back into the studio and started working on some all-new ideas.

Those ideas saw the boys exploring a more flirtatious, playful sound and general overall vibe. They wanted to push themselves into experimenting with different styles and genres to see what sort of sounds they could create. They also decided they were ready to write, produce & mix everything themselves and are now making plans for the release of their second ep MOTIONS.


Australian duo Midnight Pool Party give us another taste of their upcoming MOTIONS EP this week with a silky smooth late-night groove called ‘With You’.