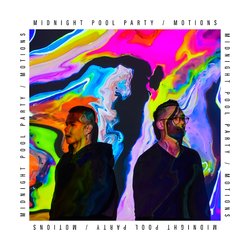 The brains behind Midnight Pool Party are Morilla and Oliver Dela Cruz.

Over the last few years they have been crafting addictive electronic dance music that is infused with a rich palette of dance, electro, r&b and hip-hop influences.

Since their beginnings Midnight Pool Party have evolved from their “classic-disco” sound & style into a mature electro/dance/house realm. As their songwriting & production began moving in this direction, Morilla also started experimented with his vocal styles and lyrics, and along the way discovered what he felt was a more natural-feeling sound as he drew his influence from Drake, Pharrel Williams and Anderson Paak.

In 2017 they released their debut ep ‘Dalliance’ which received praise and attention from old & new fans all over the world which has since collected over 2 million combined streams on Spotify alone.

Those ideas saw the boys exploring a more flirtatious, playful sound & overall vibe. They wanted to push themselves into experimenting with different styles & genres just to see what sort of sounds they could create.

They also decided they were ready to write, produce & mix everything themselves and are now making plans for the release of their second ep MOTIONS


’SLIDE’ is a quintessential MPP vibe. It starts off simple with a wurli and vocals to draw you in, and by the end you’re immersed in the complexities of different sounds to a massive climax. – Midnight Pool Party