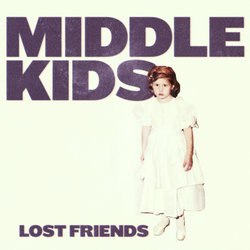 Here’s how it goes with Middle Kids.
A song will come to Hannah Joy, usually by surprise, sometimes in the dead of night, almost always in private. With the house to herself, the singer-guitarist-songwriter will tinker with it, sketching her verses and loosely framing how they could fit within the music. Then, when she’s gone for the day, bassist Tim Fitz will see what she has done and add his own shape-shifting elements and figure out if they jibe with Joy’s ideas. By the time Harry Day is ready to polish his parts on drums, there’s still room for him to put his stamp on the work.
“Even though Tim and I live together and we’re married, the work flows usually more when the other person is gone,” Joy says.
“Yeah, it’s not like we’re in the room together and say, ‘Hey, play that minor chord again, babe,’” Fitz says with a laugh. “We’re more like, ‘Get out! I’ve got some work to do.’”
In early 2018, to support their debut album 'Lost Friends', the band traveled to the US, touring and performing on Jimmy Kimmel Live.


“Don’t Be Hiding” is the latest single from Sydney’s alt-darlings Middle Kids, taken from their debut album “Lost Friends” which debuted in the ARIA Top 10 in May. The band recently completed a sold-out national tour of Australia, finishing with a VIVID LIVE performance at the Sydney Opera House. The band are currently touring the US.