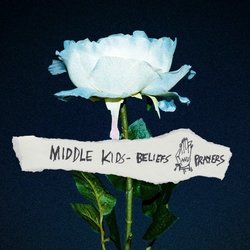 The mini-album, recorded at the band’s own studio in Sydney and produced by Tim Fitz, follows hot on the heels of what was a massive 2018 for Middle Kids and the May release of their critically acclaimed debut album 'Lost Friends'.

Earlier this year triple j awarded them the prestigious Album of the Year award saying "Lost Friends possesses a chemistry that can't be faked. Tim Fitz and Harry Day bring a wealth of energy and inventive production but it's Hannah Joy's vocals that are the heart and soul of their music. Her shiver-inducing voice ranges from beautifully controlled to heedlessly raw as she renders the drama, confusion, and honesty in Middle Kids' lyrics."


'Beliefs & Prayers' is a fanfare about people pretending to be nice when actually they are not. It’s rambunctious and intense and if it were a cheese it would be Roquefort.