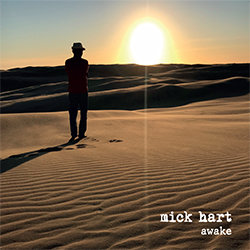 ARIA nominated for ‘Best Blues and Roots’ back in 2002, Mick is releasing his 9th studio album ‘Awake’ in April 2019. The new album is a brilliant and epic mix of soulful indie folk rock, from beautiful and intimate acoustic to blistering dirty blues. 16 tracks in total that feature Mick in inspired form.


Having already received extensive play on ABC country this hillbilly blues tune skips along and you will find yourself dancing a jig before you know it.