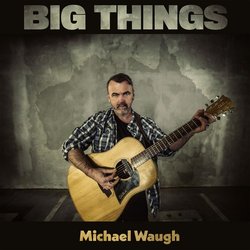 “When Michael Waugh opens his mouth, you should listen”. Andrew McMillen – The Australian

"These songs have few equals in the current Australian music scene." -Eric Bogle

"It was on my third listen to 'Warragul Police' that I came undone... I’m crying, reaching for my hanky and the CD player to play it again!" -Brian Nankervis

The Weir is Michael Waugh’s third album. It follows The Asphalt & The Oval and 2016’s What We Might Be and is Michael’s third studio project with multiple ARIA and Golden Guitar award producer winning Shane Nicholson.

The Weir reaches up from the dried, cracked heart of Gippsland’s irrigation reservoir - Lake Glenmaggie - asking what it means to grow up Australian. It is family ‘carguments’ on long holiday drives to see the big things of Australia, mozzie-bitten itches of first summer loves, Meldrum-fuelled familiarity of Aussie rock classics, and the lived-in love of dinner with your partner in front of Neighbours. But it is also about what lies underneath – our underbelly laid bare by the drought; the distances that drive us apart, the economic devastation of rural communities, the death-wish of boys in country towns, the spectres of colonisation, racism and homophobia.


‘Big Things’ takes us on a family car trip to see the ‘big things’ of Australia. It's dad trying to do a u-turn with a caravan, mum reading a map upside down. It's also fires, rivers bursting their banks, casserole dishes brought by neighbours, the things which you don’t realise are big until you see them from a different perspective.