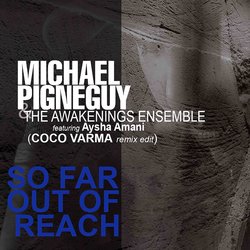 The "So Far Out Of Reach" release comes from Earthtribe (U.K.) founder and pioneer of the London Asian Underground Scene - Coco Varma. It is the 3rd in what has now become a trilogy, with his drum & bass take on Just Out Of Reach. Coco’s versions (edit & full length) in turn, have taken the track to somewhere else entirely. Michael will now take Coco’s version on board and perform it in his forthcoming live sets in Sydney & Melbourne in June 2019.

Joining him will be Evelyn Feroza + Alemay Fernandez + Marques Young part of a 8 piece, spectacular - jazz, latin, world music fusion line up. All on stage at the same time!


Michael Pignéguy, Aysha Amani & Trilby Temperley's "Just Out Of Reach" has now been taken somewhere new, thanks to Earthtribe (U.K.) founder and pioneer of the London Asian Underground Scene - Coco Varma who has added to the trilogy, with "So Far Out Of Reach. Michael will now perform Coco’s version in his live sets, Sydney & Melbourne June 2019