Michael Meeking - Where You Going To Go - Internet Download 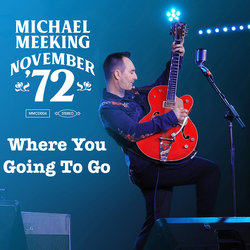 Michael Meeking performs soulful alt-country roots rock with chiming guitars, strong upbeat melodies & big choruses. Michael Meeking’s music career has taken him from Melbourne to London and back again. After six years of musical success in the U.K. Michael returned home and re-formed The Lost Souls with Julien Chick on bass, Chris Gates on guitar, and Dave Kleynjans on drums. Since his return Michael has released two albums with the Lost Souls as well as two solo albums.

Michael has been described by Jeff Jenkins of The Australian Music Guide as “a fine Australian storyteller (think Neil Murray). The Meeking might not inherit the earth, but he will impress with his passionate country rock.”

Americana UK declared that Michael had “the rock swagger of The Faces, only more refined and performed better”, while UK’s Maverick Magazine said of Michael’s previous album, Ride On: “It’s a bit like listening to your favourite bits of your entire record collection in just 40 minutes.”

“Not only a gifted songwriter and performer, the hard-working Michael is one of the genuinely decent people floating around in this thing called the music industry” – Neil Rogers, Triple R


"Where You Going To Go" is a song about choices. With hearty smatterings of Rock, Country and Blues, this song describes reaching the cross roads in life and having to decide "what do you really need".