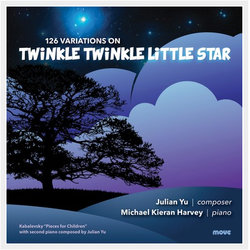 
Many of the variations are deliberately reminiscent of well-known works, created by taking the work in question as a base and substituting, merging, piecing together or superimposing the notes of 'Twinkle, Twinkle Little Star'. Styles include counterpoint, harmonic variations, tonality and atonality, 12-tone and serialism.