Michael Gabriel & The Quixotics - Round and Around 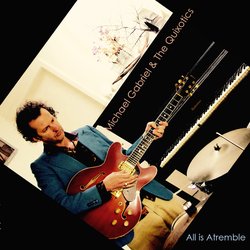 Michael Gabriel and the Quixotics have released 2 previous studio albums and are now releasing a new album 'All is Atremble' recorded at home in the loungeroom by Michael and his son Gabriel. The release will include an eastern states tour in Jan 2017 to take on Melbourne/Sydney/Tamworth/Byron Bay.
The Quixotics previous albums included a WAM songwriter nomination for the track 'Beekeeper' and the selection of track 'Clouds' for a short film.

Michael Gabriel was the principal song writer and guitarist in Colourblind, a band that produced several albums and played live extensively for many years between Perth and Sydney.

“Playing next were Michael Gabriel & The Quixotics...The band played a dreamy style of pop-rock that left you in sort of fantastical haze. They had a very delicate, raw sound to their music that made you feel like you should be holding their words closely to you so that they don’t break.”
Karen Murphy, Spaceship News.


Melodic easy paced groover opening with acoustic guitar and vocals then introducing sax percussion and harmonies as the song progresses including a tasteful instrumental bridge with organ and sax solo. Reflective lyrical content with an optimistic message that it's never too late to "turn your world around."

Other tracks by Michael Gabriel & The Quixotics: Fire  -  For Awhile
%