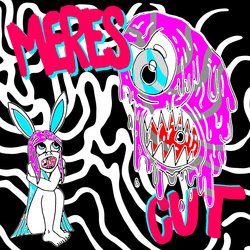 Meres’ dreamy stoner punk explores Shannon’s reflections on the obscure, the dissident and the mundane, as written through the atonal gauze of her own unique and abstract feedback loop. In July 2017 Meres was selected by Kram (drummer and vocalist for multi Aria Award winning Australian rockers Spiderbait) for the APRA/AMCOS supported mentorship project One Eye on The Stranger.

Meres’ first release ‘Hell is on its Way’ debuted at #2 on the Amrap Regional Charts. Follow-up single ‘Feardom’ continued momentum, resulting in a busy year of performing at nearly every festival of note in Tasmania including Falls Festival, Panama Festival and Party in the Paddock.

New single ‘Cut’ was originally recorded as a demo with Ben Simms of A Swayze & The Ghost and features Meres’ signature bold, crunchy guitar riffs and punch-pop melodies, while entering a somewhat more upbeat sonic territory.


“I wrote this song around the time a friend's father passed away. It was written from a strange place of guilt, grown from the expanding distance between us - I wasn't sure how to be their friend like I used to be. It’s about wanting to feel that intense connection with someone again, trying to fight for it."