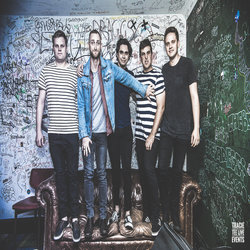 Mercury Sun are a five piece indie-rock outfit hailing from Brisbane, QLD. The band members include Ash Benham (Vocals, Slide), Louis Reen (Guitar), Connor Reen (Guitar) and Harry Schneider (Drums). Formed in 2013, the band's sound has evolved out of the diverse musical influences that exist within the band.

Mercury Sun's live show has been the cornerstone of their short but productive career which has seen them play alongside some of the country's best acts including Wolfmother, British India, Thirsty Merc and The Grates.

In 2017, the band released their 2nd EP "Generation Why?". And as of 2018, the band are currently recording their first album set for release in 2019. The first single from the new album, "Stumbling" was released late last year, and now with Sin City this April


Sin City is a metaphor for that search and almost a self confession that represents the struggle for authenticity of the perfect life in the superficial age we live in whether it be in relationships, financial stability or the fear of regretting what we don't do rather than the mistakes we do make."