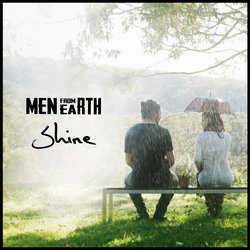 This is an ethos Bird has stuck to his entire life playing music, which began in his early teens. The approach solidified in the late ‘80s and continued through the ‘90s when Bird was a founding member of Pale Riders, a group who essentially pre-dated the nu-roots wave, which crested in the early ‘00s with the likes of Ben Harper, Xavier Rudd and John Butler.

Fast forward and Men From Earth are a diverse collective of passionate musicians. Four generations (ages range from 21 to 62), of players, honest heartfelt lyric, sound and vocal harmony. A band which effortlessly strings together the threads of blues, folk, country and celtic roots. Scott Bird, the bands leader and musical director, is joined by Tom Beasley (mandolin, banjo and vocals), Luke Wright (mandocello, acoustic guitar and vocals) and Robert Patey-Downes (percussion and vocals)


Sweet mandolin defines this track, a simple melodic line from Beasley which supports dual acoustic guitars and the subtle rhythm section, resulting in a quietly upbeat track, overlaid with Bird’s vocals. ‘Shine’ talks of the light at the end of the tunnel no matter how dark things can get.